Yep the title does kind of sum up my attempts at returning to the written word. But tis not the Black Dog that has kept my itching fingers from the cobwebbed keyboard of late, well not for the last couple of weeks at least, but rather an up turn in fortune. For of late there seems to a definite change of mindset in my head, kind of like the connections within my short circuiting brain are actually being made for once, allowing myself to think a tad more clearly and thus being able to focus upon tasks in hand. Well actually that should read 'task' as multi-tasking is a thing that will always be beyond my simple capabilities m'thinks!

I think there may be two major factors in this positive direction that I'm on, well at least for the moment that is. Firstly a couple of months ago I terminated my contract at t'big garden. It wasn't without some considerable thought and consideration that I finally came to this decision and at first I severely doubted it was the right thing to have done. But working there had become just that, work. Yes I know that running my own business should be firstly about turning a profit and putting bread upon the table but the reason that I left over thirty years of factory engineering was to help my mind heal and to work at something that I love and am passionate about, the very reasons that I now am a gardener. So why had t'big garden become such a bid after such a promising start? I don't honestly think that's a question to which there is an easy answer, but partly because I feel that my employer's attitude had changed towards me, especially after I had been approached by another 'big garden' that I was open about and turned down when there offer was matched by t'big garden. Also I had begun to feel that I was not just required to tend and develop the garden when tasks such as gutter repair, log chopping etc became the norm and expected of me. I would have loved to have stayed for more years to tend and watch my designs mature into the garden I could see in my mind, but it was to protect my mind that the decision to go was made.

At first my business struggled as I had to build up a client base and compete against so many 'so called gardeners' who are basically just folk who will hack n slash a garden whilst telling you that they are professional and knowledgeable ....bullshit,,.... but m'thinks that will wait for another post as I can rant about these guys for hours upon end. Indeed it has been a struggle to start off with, not that I couldn't find work but actually finding work and turning over enough money with which to live. But after that initial stage the work is going well (touch wood) and my bank account is turning from a deep crimson to a more Salmon pink colour of late, With plans to open a small nursery in the pipeline and to expand my winter machine servicing service (does that sound right?) the future for my business is starting to look a tad more secure.

The other main reason is that I've basically broken all contact with my blood family. This may sound a bit sad and indeed drastic but it really is not either of these. After my father passed away nearly two years ago now I slowly began to see my siblings and even my elderly mother for the people whom they truly are. I think that the problem with families can be that you just accept that you love them and you don't always see them for the actual type of individual arses that they may indeed be! I'll not burden you with my issues with my three remaining family members except to say that if they had not been related to me I would not have included them as friends. Ok, I probably will burden you at some point, especially about my brother, but not today. My father was a completely different matter, I miss him deeply and still talk to him, asking advice or just chewing the cud. He was one in a million and I can only hope that I make him proud in some small way.

This breaking of contact and realisation that family are just people seems to released my spirit somewhat. Gone has the need to please them or bend over backwards for them. I'm the youngest of the three siblings but have always felt and acted like the elder one, taking on the responsibilities and being the one to sort out things when the others just run around like headless chickens, wailing and gnashing their teeth (yes I know chickens don't have teeth...that's why they succeed ta daaa). But by distancing myself from them I'm now able to be a tad selfish and I'm starting to look after number one more which in turn allows myself to look after George and Bramble, something I have failed at for far too long I think.

So yes, tis not all doom and gloom though if I'd have just written 'given up t'big garden' and 'been exorcised by my family' perhaps you'd have been forgiven for thinking the Black Dog had finally won the battle and broken my mind fully. But that day has not happened, not yet at least.... 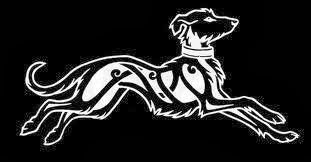 John - Good to hear from you.

My heart is gladdened to hear that you have some clarity. Sometimes it takes unfortunate or even jarring events for us to get some clarity. And if what you are doing in spirit is just as what you left, then you have made the right decision.

I'm glad you're getting some things sorted out. Some folks live their lives without ever reaching that point. As for family, I watched them take advantage of my father for years. I made certain that I never got myself into the same situation.

Well done! I have told various family members in the past, that if they weren’t family, they wouldn’t be my friends. We are a small bunch, haven’t really grown up together so it’s hardly surprising.

I have just discovered you. What an interesting read. More, please.

Sounds like you have turned over a new leaf, which is very appropriate for a gardener! I applaud you for your courage and wish you all the best.

Thank you TB, I still expect a loss of clarity but at the moment things are clear for me.

Thank you Mr. Smythe, tis the old adadge m'thinks....'you can choose your friends but not your family'

Thanks Dc, it's the point when you realise that family are just people that opens your eyes to their faults.

Indeed Trudie, it's only taken me 54 years but i'm beginning to see the light m'thinks

Thank you and welcome Tewshooz, the aim is for more to come..

Hey John, it's liberating when you suddenly realise that it is ok to let go of family. Friends are the family we choose for ourselves. I hope your new business fulfils you... and pays the bills. x

Hi John, I came to say hello after you left a comment on my own blog. I think you were very brave to take the decision to leave the job, clearly if you have such passion for gardening well and were being drawn away to mundane tasks, not getting good vibes off your boss and feeling restricted in your creative work, it was not good for the soul. My brother is a landscape gardener, self employed (not the kind that hack things down, the contrary as he has a great interest in conservation). He either has too much or too little work depending on time of year so shares with another chap and they balance out the lean times together. He is particularly keen to allow nature to flourish in his landscaping, to encourage natural lines and to invite wildlife. I hope you too can work like this, there is more chance of doing so when self-employed I guess as you can get clients that appreciate your remit. Good luck. Ref the black dog, unfortunately families can't always see him, even though they may have one themselves, and if we don't accept we don't understand, forgive or love one another enough, I hope things get better for you in that department. Looking after number one though is important and not selfish. Wishing you all the best.

Ah yes, you can choose your friends but not your family!xxx

Blood family can be the bane of existence. Chosen family sometimes works better.

Hi Betty,
apologies for the extremetly late reply, thank you so much for dropping by and leaving these words. As a hint to the style of gardening I enjoy my very small business is called....The Suburban Wildlife Gardener.

Indeed, this I have found very true...